According to experts, the outgoing year was not so bad for the cryptocurrency market, especially compared to the crypto winter of 2018.

How the market capitalization has changed, how many times Bitcoin and other coins have risen and fallen — read the article by Bitnewstoday.

THE TOTAL CAP OF ALL CRYPTOCURRENCIES HAS GROWN

Pic 1. Dynamics of cryptocurrency capitalization in 2019

The capitalization of altcoins has not changed during the year. At the beginning of 2019, their total cap was at around $60.4 bln, and so far it has reached only $60.8 bln (an increase of less than 1%). The maximum aggregate value of cryptocurrencies with the exception of bitcoin was recorded on June 27 — and it reached $137 bln.

Pic 2. The dynamics of the altcoins’ total value

Throughout the year, Bitcoin has been building up its market position. The share of the most significant cryptocurrency has grown from 52% to almost 69%. In September, this figure was close to 71%.

Pic 3. The dynamics of Bitcoin price

WHO KEPT THE LEADERSHIP?

The TOP 7 cryptocurrencies in terms of capitalization start with Bitcoin and also include Ethereum, XRP, Tether, Bitcoin Cash, Litecoin, EOS.

Pic 4. The structure of the cryptocurrency market 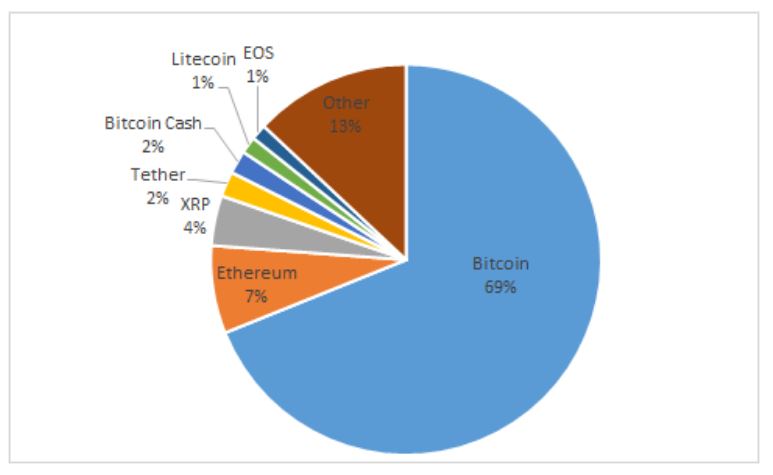 Source: BNT, according to Coinmarketcap data

The share of Ethereum decreased by 4 percentage points by the end of the year, and the price decreased from 136 to 128 dollars. The share of XRP decreased almost three times — from 11.5% to 4.3%. Tether, on the contrary, increased its share — from 1 to 2.2%.

THE MOST SIGNIFICANT EVENTS

Alexander ALEKSEEV, managing partner of GSL Law & Consulting, considers the rise of bitcoin price in late October to be the most significant event of the cryptocurrency market of the outgoing 2019:

Experts also attribute the following to the most significant events:

“The trade war between the USA and China allowed Bitcoin to easily overcome the psychological mark of 10 thousand dollars, and the news about the launch of the Libra project led the price to absolute highs above 13 800. The market fell throughout the second half of the year. At first Bakkt did not live up to expectations, then regulators banned Libra, then the US and China suspended the trade war, then they did not let TON launch. Against this background, buyer activity and interest in the crypto declined, and the market moved from highs to bottoms,”

— concludes Pavel GROMOV, the host of the russian channel "The leading in crypto" («Главный по крипте»).

Changing the opinion of the Chinese authorities about cryptocurrencies next year will have a positive impact on the market. Most experts expect the rapid growth of bitcoin together with large altcoins and an increase in market capitalization to $500 bln in 2020.